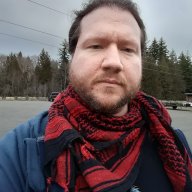 (I wrote this as the intro for what I'd hope to flesh out as a longer story, if not a series. I might even get back to it, since this is something I first started years ago ^_^U)

It was a dark, but clear August night just east of the Washington Rocky Mountains, still in the foothills. If one were to look up, they'd clearly see every star in the sky through the needles of the bristle-pines.

Mel was shuffling through the woods, trying not to stumble. He'd been drinking, which was usual, but he was chasing his animals, which wasn't. For a month, now, strange things had been going on. He wasn't worried about the freak-meteor shower; it hadn't been called for in any of the news, or even his copy of the farmers' almanac.

It was strange, but it didn't trouble him until more strangeness started right there on his property!

It started small, he thought to himself as he took a nip from his flask. Things would move around; little things, like his tools turning up in places he was sure he hadn't left them, and he'd lost his radio.. He'd have blamed the neighbors, but he didn't have any. He wished he'd had either once he started hearing... Things.

He could handle things moving around, and going missing, but he started hearing noises unlike anything he'd ever heard. Now, Mel wasn't the sort of man to jump at a possum hissing; he'd lived in these hills his whole life, and heard every kind of animal there was to hear. He even swore he once heard Sasquatch calls, but this scared him worse than anything. Some kind of bellowing, howling scream!

Especially since, not long after the calls started, he stopped hearing other things. Things like the trumpeting screech of the elk, or the yapping of coyotes. His goats started getting agitated, on edge, like some predator was stalking around at night.

He knew it wasn't bears; they make noise and knock over trash cans (the latter having stopped after he put electrical wire along his fences 5 years ago).

He knew it wasn't a puma; they don't steal traps.

He'd began setting traps here and there on his property when "The Sounds" started, but every day when he made the rounds to check them, another one would be tripped with nothing in it, or simply be gone.

And now, here he was, drinking more to calm his nerves now than to pass the time. He did not want to be out here. There was a fog rolling in, and he knew, he just knew, something was watching him.

He knew it was, and it had been for at least two weeks.

One night, back then, his lights went out. He picked up his lantern, and checked the generator. He'd gotten to drinking before he'd finished his evening routine; forgot to check the fuel levels before he settled in. It had happened before. But, as he walked back to the house, he heard a strange noise. A hissing, clicking noise, like nothing he'd ever heard..

Then, the next night, his power cut out again. He was about to go outside, when he stopped at the door. He'd heard something- he listened carefully. His goats were more agitated than ever! At one point, while their bleating had briefly lulled, he heard it- the clicking. Oh god, he thought, something has gotten inside my fence, and it wants me to come outside!

He had run back up into his loft, drew up the stairs and hatch behind him, and sealed himself in. His loft only had the one way up, a retractable staircase, and he pulled down the steel shutters he'd installed over his windows. Combined with having his loft set up like a separate, independently powered apartment/panic room, he was prepared to wait it out until morning. He was not, however, prepared to sleep. Not after "The Sound" outside his back door two hours later, followed by something landing a blow that shook the whole house!

The next morning, he found the generator- he didn't have to go far, this time.

It had thrown the generator at the house. Upon closer examination, he'd confirmed his terrible fear from the previous night- the fuel line had been cut.

It had set a trap for him.

Now, two weeks later, here he was, one night away from a delivery/pick-up from town that would give him fuel to get in his truck and get out of there, get to town, get the authorities involved. His radio, which he'd kept in the office in the barn, was his only way to contact the outside world, and the monster (which he was now convinced it was) had taken it. And it somehow drove his tractor through the fence, and into the pen. His goats escaped, and it clicked along after them.

Here he was, mired in a thick fog, soaked with sweat and dew from the outside, and whiskey from the inside, but sobered by terror, the ridiculously large rifle in his hands shaking. He knew he shouldn't be out here, but he had to at least try to recover his animals, even just a few of them.

It was getting closer.

It was coming for him.

He ran blindly; stumbling this way and that, dodging trees and branches, just trying to outrun the monster. He lost the rifle at some point, but he just kept running.

A log was coming up- he jumped over it, and stopped mid-air! he realized, as pain ripped through his body, that the log was a fence post; he had been herded into his own electrical wire along the hole in his fence! He convulsed for a moment before falling off the wire and onto the ground. He scrambled on his hands and feet; there was his house, not a hundred feet away!

He could hear that hideous nightmare clicking behind him, closer to him than he to the house- got to get inside!

He jerked, and fell.

It lured me out and than put the traps back!

He sat up and fumbled deftly at the bear-trap clamped over his ankle, his fingers uncooperative, still numb from the electrical shock.

Mel struggled, and then froze as he heard that hissing-clicking, just outside his vision in the fog. In front of him- then behind, and to either side!

It was a pack!

He cried, and sobbed uncontrollably, his vision blurring as he desperately tried to free himself. He heard the sound of them moving- quickly, they were charging as they closed in!

He let out a hideous scream before they reached him, wishing his tears blinded him from that which was to be the last thing he ever saw.

His scream faded, drowned out and over-taken by "The Sound".
You must log in or register to reply here.
Share:
Link