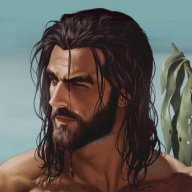 Hey. My name's John, and I'm looking for other experienced writers to write with!


My ideal role-play is setting up a kind of a city, or a setting, which the female character can trawl through at her leisure. I play multiple characters designed to interact with her, and also DM the atmospherics. Ideally, the female character will change over the course of the role-play, one way or another, and there is an outline of a plot written beforehand, but the ending itself is rarely (if ever) planned.

As for the tone, I like it when the eroticism starts early, but not necessarily in the form of sex. Rather, the female character may be described in the passive voice whilst her character does her day-to-day activities. Then the eroticism stems out of that. That's good erotica to me. Build up the tension, then burst the tension, change something about the story, and then do the same thing all over again until we're both sick of it.

In terms of settings, I like medieval cities, dystopian cities, fantasy worlds, and more. The more colourful the better!

I play sensitive characters and taboo ones. Men who are nothing other than nicely curious, and men who will try to coax YC to do things for them. Both sides of the coin, and ideally, you won't know who's who, and which is which, and will have a lot of fun finding out.

I've found over the years that the people who enjoy writing with me the most are those who enjoy darker stories, or stories that come across as grittier. I have converted die-hard romance enthusiasts, but the inkling's usually already there.

Lastly, I am a taboo role-player, and common elements of my role-play include kidnapping, drug use, hypnotism, enslavement, manipulation, and blackmail. But—obviously—not all of them at once, and all of those which are included will be agreed upon beforehand.
So, I feel inclined to include a disclaimer about the kinks I've listed. Apparently, some guys like to use these particular kinks as a way to make it so the female OC has to sit in ''gormless mode'' for 9 hours during the role-play. Yeah—no. I'm not that asshole. That sounds as boring to me as it does to you. Rather, hypnotism in my book is planting triggers/rules in YC's head for her to react to at a later date. Likewise, blackmail's used to increase the conflict, and drug inducement is used as character foil. Manipulation's done subtly, and threats of physical violence are few and far between. They're a means to an end for my darker-sprited characters, basically!
I'm specifically seeking (at present):

Zuko is undercover in a tea shop with his grandfather, trying to live a normal life away from his crimes. Katara comes into the tea shop and recognises him after a while. She knows he's a very bad guy, and confronts him about it outside, saying she knows who he really is, and what he's done, and that she intends to report him.

He begs her not to, says that he's changed for the better, and it does seem that way, but she's adamant. She leaves him standing there... and tells Jet about it. Jet says he'll try to find a way to confirm Zuko's identity for her, but that he needs her mother's necklace in exchange (he needs the gemstone for his own motives). Jet and her have a love-hate relationship, she doesn't entirely trust him, but she does find him attractive. Yet she can't bring herself to give him her mother's necklace...

Later that same night, she's attacked by mercenaries, who she does manage to beat.

The next day, she comes back to the tea shop with guards, but she can't prove Zuko is who he says he is, or that he hired the mercenaries. But she makes sure he's under a lot of suspicion anyway. Then, she goes to Jet, who has found a scroll with Zuko's picture on it which can confirm his identity, but on the way back to the tea shop, someone jumps her, and tries to kidnap/hypnotise her and take her outside the city for nefarious purposes.

Zuko hears about what's happened to her from a customer in his tea shop and decides to come to the rescue. But can he do it? Or will he be the one in need of rescuing once she's under the Fire Nation's spell?
OC/OC:


YC would be a Princess-in-distress, while my main character would be a war-torn Prince from a bordering nation. If you prefer to play a female character that subverts expectations, the following plot can be adjusted very easily to suit your playstyle.

Your character is betrothed to a weak, cruel, unlikable bastard. Her father's judgement has slipped over the years and his court has become corrupt. As a result, YC hates her father, dislikes her life in the castle, and turns to drugs to distance herself from her reality. She becomes addicted to these drugs, sold to her by the Castilian, a man who desires her and her father's throne.

As the role-play begins, we see her being forced to sit at celebrations with her betrothed. The celebrations are for a neighbouring Prince who has come to swear fealty to YC's fiance. The Prince is a handsome, rugged, sharp-eyed swordsman; the son of an infamous King.

Her fiance begins to mock her openly to his guests, describing her sexual inexperience at length to the people around him. Everyone laughs; except the Prince, who appears not only disinterested, but also lightly distracted by a dog that roams the halls.

Tired of acting her part in the celebrations, YC seeks out the Castilian to purchase her fix. But he will no longer accept her money. He says that people are beginning to notice her habit. Desperate and addicted, she asks him if there's anything she can do. He takes advantage of her, starting her sexual awakening.

She isn't sure if she liked it or not. It felt good, but also wrong (the drugs affect her judgement). Ridden with guilt, but having acquired her drugs, she goes to take them. But my Prince finds her in the dining room with a powdered nose.

He comes up and snatches them away from her, (much to her chagrin), and she argues and offers to please him (like she pleased the Castilian) in exchange--but he turns on her, stopping her from doing so, and is seemingly aggressive, but then gentles and tells her to have hope: and that she should not bed with her fiance tomorrow night.

There's something in his voice that gives her pause, and he looks her over, wipes her nose, and then leaves.
Others:
I have ideas for all of these. Nudge me if you want the full write-up. To comply with forum rules, all characters will be bumped up to (18+). I prefer a 60/40 or 70/30 smut-to-plot ratio.

I'm also open to being contacted about plots you might have! (OC's and Fandoms!)

Thank you.
Reactions: MonMis, Zverda and Kat
You must log in or register to reply here.
Share:
Link
Top Bottom