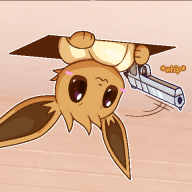 It'll be a pleasure to meet you, I'm sure! My name is Irredeemable, sometimes called Deem or Deemy for brevity, and enclosed within are the MxF ideas I have. Note that I do actually play a pretty broad spectrum of characters of all genders (and occasionally no gender,) but for the sake of not clogging up the forums I'll be keeping just this one open as a general check for now, and suggest you private message me if you're interested in not doing just a pure MxF pairing, or looking out for the specific plots and/or pairings I put out in the other forums.

First, although it does suck, I'd like to establish some rules very briefly. I know, I know, nobody really likes rules, but it's a good way to make sure we're all on the same page before we start talking, writing, etc. Just makes everything neater!​
So, that's the rules. Only four of them! Should be easy to follow I hope

. Now then, onto the plots, pairings, partners and other words beginning with 'p!'

Pairings:
Pairings are quite simple. I don't have a plot, I don't really have a setting, but I do have two character archetype/types/ideas and want to throw them together. Let's work on all that important meat together, shall we?
​

Settings:
Settings are scenarios that I don't have plots in mind for, or that I have too few plots in mind for my overall ambitions. They tend to be taken from historical periods, with fantastical elements thrown in, and some real-world elements changed or made to accomodate.​

From Mytikas Peak:
Mytikas Peak, better known as the throne of the Gods, is the highest point on Mount Olympus. The setting that spreads out from this is one heavily inspired by Golden Age Greece. In the world of Mytikas, demigod heroes clash with terrible monsters, the Fates weave their golden threads through unremarkable lives, and great city states clash and struggle for dominance.

The Land of the Midnight Sun:
Jutland, Norge, Sverige and Sumoi are lands of bitter winters and hardened men. Accustomed to the cold, marvellous sailors, ferocious fighters and adventurous traders, these Norsemen voyage out to explore, settle, and plunder the known world. Death is hardly the end either, for fell magics and powerful rituals can cause draugr to plague the living, or a powerful warrior might descend from the heavens to carry out the will of the Gods.

Cherry Blossom Falls:
Feudal Japan inspired plots. Ronin, shinobi, noble houses warring for supremacy, warrior nuns, maybe even some spirits and magic thrown in for good measure. If you've been wanting to play as or with a ronin with no name, let's figure something out!

City of Supermen
I've been hit with a craving for a superpowered roleplay recently. I have a few characters I'm interested in playing- an older, more professional supervillain with experience under their belt, a new on the block, cocky, and absurdly powerful (yet very, very outclassed) hero, a superpowered prankster and a few other besides. I've got characters to fit almost every superpower 'vibe,' from more comedic to more gritty. Let's figure something out!

The Jackboot:
Another cyberpunk plot, and another one from the perspective of the 'bad' guys. This time, corporate enforcers- loan sharks with guns, functionally speaking, and the terrible things they do. We'd both play enforcers in this one.

Magic Out West:
A dungeonpunk/western fantasy story. An uncivilised county needs a new marshal, who arrives to a classic western scenario. Banditos, natives and encroaching coporate interests all break the laws of the land in their own way, and it's down to the marshal to mete out justice however they see fit. I could play either the marshal or a local gunslinger for this one.

Out The Forest:
An arranged marriage between an elven prince and a human princess. Mostly a political plot, revolving around the machinations of court and the interactions between the very different cultures that gave rise to the two main characters. Looking to play the prince.

That's All Folks! Thanks for getting this far, and if any of that interested you, I hope to RP with you very soon!

Added some more pairings and two new 'plots' mostly based around the time period they're inspired by than any actual plot. I can already tell this'll need some editing to its formatting as time goes along...
You must log in or register to reply here.
Share:
Link
Top Bottom