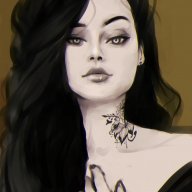 What you can expect from me:

OOC all the time

Respect for my partner.

What do i expect?

Well reread above. I give what I require.

MC and YC are best friends, except they are hiding a shocking secret. MC is dead, yup thats right YC is a medium and when MC passed away their death was chalked up as a suicide but YC gets a visit from MC begging their help. Saying on repeat that it was NOT. A suicide it was a murder.

YC can talk to and touch MC but no one can

This can be a romance if you wish

either it can be a full on death or a coma.

Details of the crime will be hashed out together.

Jeri finally decides to go out with her friends to the local mixed bar. A mixed bar is were humans and supernaturals can be around each other. Unexpectedly jeri wakes up next to a (SN). In fewr of beinf caught beeaking the cross mating law. Jeri runs for it. A month later she runs into them again, the very same day she had found that she was pregnant.

A race that can be either or gender. Or male idk yet

aside from pregnancy maybe the SN is a queen and accidently marked her as a mate.

Plot Three:
Plot idea: After a break from war. MC and YC come back to a long time war. Memories of their time together still swirling in their mind. Until the happy memories turn to painful memories when they find out that they are the top fighters of opposite sides of the war. Being forced to fight someone you love, can they survive this?
Reactions: Nihiline
You must log in or register to reply here.
Share:
Link
Top Bottom