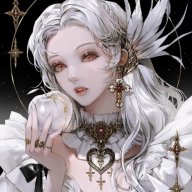 Hello! First off let me tell you a little bit about myself! I'm a lady role player ~ In my free time I enjoy writing, reading, watching Anime, working outside and cuddling with my furbabies.


My style and expectations:

I am a third person, past tense role player and would prefer to have a partner who writes the same.

You don't have to be a writing expert, but I would like a RP partner who has good grammar, spelling and punctuation skills. Mine are not perfect so it's not perfection I'm seeking - Just need it to be readable, and understandable.

I'm looking for at least a full paragraph or more in responses. Does not have to be super long, but a bit in depth with the character and happenings would be lovely on top of what they're saying. I'm not against doing shorter lines of role-playing when appropriate. :)

I plan to be active and responsive two to three times a week, and would like the same in return. Weekends I can respond a bit more often. Throughout the day on Sunday. If wanted.

I would love a long term story, but can do short term if preferred.

Roleplay length - I write anywhere between 300-500 words currently. I’d like this to be multi para

Romance I would like to see - and smut can absolutely be in this story however, I don't want this story to center around smut. I'm open to sexual themes in my roleplays, but if you're someone who doesn't like writing the actual sexual act, let me know.

Forums or messaging works for me

The world has fallen into chaos when Creatures begin to rise from under the Earth and destroy whatever is in their path. People have been sent into fight or flight mode struggling for survival, many died and the population has plummeted. Families, friends, and significant others are separated. Cities and towns now a ghost of what they once were.


Ten years after the beginning of the end - the new normal of life is to live in small buildings, or on the outskirts of towns/cities with a group of people fighting to survive by learning various survival skills and fighting methods. Guns don't work on th creatures - Leaving people to use weapons of old and those that can't fight find protection where they can, or die.

MC is part of a group of elite fighters known as 'Mask.' They track down and destroy these creatures with weaponry magically infused with the blood of the dark monsters that rose from the Earth. They in a sense sign a contact with the creatures essence.

When infused in their weapons the creatures essence lends their power to the infused weapons user . The price? A trade. Some human essence for some monster which turns the people into a mix of creature and human. This mutation affects peoples physical appearance differently. Some grow huge muscles. Some have scarring that glows like toxic waste. Others have a glow to their eyes And etc.

Unfortunately, Mask is not exactly welcomed by human kind despite all they do to protect them and the cost they’ve paid. Them being mixed with creature essence had lead to the average people to have mixed feelings about them. On the other hand, there are people out there that see this as a great sacrifice and are grateful to them.

Either way, Mask tends to live in a hideout away from civilians in the city nearest to where the monsters attack and near where they attempt to leave to try and find survivors who live on the outskirts to eat. Mask makes it their job to stop the monsters before they kill more innocents.

One thing this group all has in common due to the creature essence is they stop aging.

MC is a bit of a loose canon and hardly listens to her brother who is the leader of the group of Mask. One day she goes off on her own to track a monster that's been terrorizing the safety zone. She finds it just as it almost kills YC saving him or her. However, YC has become infected. Somehow Yc has begun to display physical signs of having the creatures power without signing a contract - Because of this Mc takes Yc to the hideout where Mask resides.

MC leads YC to safety without speaking a word and keeping an air of mystery. It's not until Yc meets the group that they realize who MC is. Their past lover from when they were 20. Mc fell head over heels for YC, and Yc played along as though they felt the same just to cut her off coldly and ghost her for another. Mc was left heart broken, confused and left without answers. Feeling used she forced herself to move on but still has some unhealed wounds from this as Yc was also someone she befriended in her childhood.

So, why did she save YC?

As you can see - This is a story of past lovers coming together rather unexpectedly but this story not only sets around their potential rekindle of romance but around why YC and more importantly how Yc has come to be infected and what this means for human kind - and 'Mask.'

I’m open to further plotting as I want you to have fun here too!

I will send a photo of Mc along with a sheet. Please private message me about this RP! Thank you~

Reactions: CrimsonFang47 and Moon
You must log in or register to reply here.
Share:
Link
Top Bottom